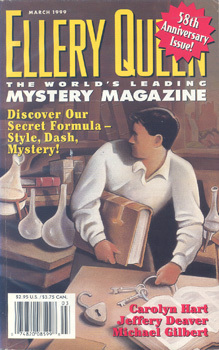 The author of nearly four dozen novels, bestselling author Carolyn Hart seldom writes short stories, but when she does, they’re not to be missed. This month’s selection, “Spooked,” from EQMM’s March 1999 issue, is set on the home front, in Oklahoma, during World War II. Often hailed as America’s Agatha Christie, Carolyn Hart creates a memorable picture of childhood and war in this tale, which became the basis for a book entitled Letter From Home. Following the author’s reading of the story is an interview conducted by EQMM editor Janet Hutchings at the Malice Domestic Convention in Arlington, Virginia, with Carolyn Hart, Nancy Pickard, and Margaret Maron.